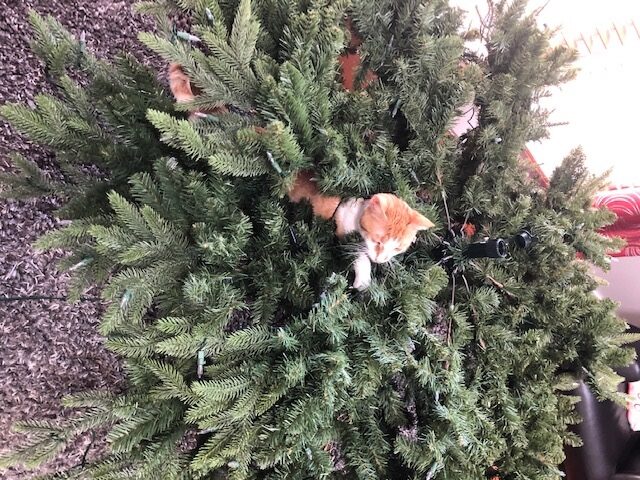 With Christmas around the corner I felt it would be nice to share a story with you.

In June of 2020, I was driving north on Lake Shore Drive in Lake George.  Traffic was extremely heavy due to the summer crowds and when I reached the Saddle Up Stables in Diamond Point it ground to a halt.  I could see the vehicles in the southbound lane slowly swerving around something, causing the backup.  When I got closer I noticed an orange and white ball of fur curled up in the middle of the lane.  It was a cat.  He had clearly been hit by a car but I could tell he was still alive.  As I passed, I spun my car around, threw it in park and put my hazard lights on blocking traffic in both lanes.  I got out and inspected the situation – he was in very bad shape – it appeared he had a head injury as there was blood coming from his eyes, nose, and mouth.  The cars on that road average 40 to 50 miles per hour and the fact he was still alive was astounding.  It was quite obvious he was feral – he was extremely underweight and dirty.  I grabbed a pair of gloves from my trunk, went to pick him up and he turned his head, eyes closed, and hissed.  A fighter.  I gently pet his back and he immediately calmed down.  He must have been in so much pain.  I called my brother, who was still at work, and relayed the situation – I found an injured cat and I need the location of the nearest emergency vet clinic.  After jumping online and finding the Northway Animal Emergency Clinic in Gansevoort, he contacted the staff to fill them in.  They said to bring the cat in as soon as possible; if it is a head injury, time is of the essence.

Pulling into the parking lot, I was met by one of the veterinarian assistants.  She took him inside and said to wait in my car, the Dr. would call soon call with a prognosis (it was during Covid and they weren’t allowing visitors in the hospital).  Half an hour later, the Dr. called and said they had run some tests, which included a scan of his head, showing significant brain swelling.  He said considering the situation, euthanizing him would maybe be the best course of action; with head injuries of this nature, there was no telling of any long-term neurological damage.  I made the decision to have him try everything he can do, and we’ll hope for the best.  He agreed and immediately started administration of the proper medications.  Knowing he was in good hands, I continued on my way.  The assistant informed me the Dr. would call first thing in the morning with an update.

The next morning at 9:00am I received a call from the Dr. and he informed me the cat was doing extraordinarily well.  Despite the bleak prognosis, he was responding well to the treatment – his eyes were open and he was aware of his surroundings.  I continued receiving regular updates and within only a week, it was clear he would make a full recover.  Despite his obvious neglect and recent trauma, he quickly became a favorite among the clinic’s staff – he loved being held and always sought out the attention to whoever was close by.  I decided to name him George, after the lake.

Soon, the Dr. cleared George for discharge.  I picked him up and brought him to my mom’s house so he could fully recover.  The vet assistant informed he may have trouble eating due to the daily medications.  Nothing could have been further from the truth – the second the food touched his bowl he scarfed it down.  I’ve never seen an animal ingest something so quickly in my life.  On top of that, he never once hesitated to jump in our laps and would get visibly upset if we left him alone.  He loved the company of anyone and it was evident George was going to make a great companion.  We eventually found a home for him with a close family friend.  Her cat of many years had passed some time ago, and she was ready to welcome another member into her family.

A month later George was picked up and brought to his new home outside of Syracuse.  Not one to be shy, he quickly warmed up to his new surroundings.  His antics and personality bring joy and humor to their lives, every day.  He loves being involved in their activities and here you can see him helping with dinner, doing the dishes, setting up the Christmas tree, and making sure the plumber installs the sump pump correctly.

George’s story is a miracle.  I was at the right place at the right time, and by the grace of God, he was able to survive and is now living a happy life.  So many animals out there aren’t so lucky, and it’s up to us to help as many as we can.  I’ve been fortunate to work with one of the best organizations I’ve ever encountered – Whiskers Animal Benevolent League.  They’re a small, no-kill, entirely volunteer run, shelter based in Albany, NY.  Every one of their volunteers is dedicated to ensuring the lifelong care of abused, neglected, and sick cats.  I humbly ask that if possible, please make a donation; Whiskers goes above and beyond to help these animals – giving them the care they need, and ultimately, finding loving and responsible homes.  You can make a donation or view adoptable cats on their website:

From myself, the staff at Central Plumbing and Heating Supply, and George, we wish you and your family a Merry Christmas, and a Happy New Year.